Thanks to new connections to Oklahoma’s research network, smaller universities such as the University of Science and Arts of Oklahoma (Science & Arts) now have access to super computing resources across the state, allowing for a quicker computation of data and new opportunities for research initiatives.

This fall, five institutions connected to the OneOklahoma Friction Free Network (OFFN), Oklahoma’s research network, through a National Science Foundation (NSF) grant awarded to the Oklahoma State Regents for Higher Education and OneNet. OFFN is a 10 and 100 Gbps research network that provides higher education institutions with a dedicated internet route that is much faster than traditional internet highways. This alternate pathway allows researchers to bypass slower traditional networks and transmit data at higher speeds.

Science & Arts was one of the five institutions newly connected to the OFFN network. This opened doors for faculty and students to access super computing resources at Oral Roberts University (ORU), which was connected to OFFN in 2019 through a previous NSF grant award.

ORU’s Titan supercomputer is one of the fastest in the state. In 2019, ORU received funding from the Stanley White Foundation grant to create a supercomputer with advanced research capabilities. Titan

was first initiated by the donation of 41 servers by Hewlett Packard Enterprise and enhanced over the years with internal funding.

With the new OFFN connection, Science & Arts’ Associate Professor of Chemistry, Dr. Dany Doughan requested use of ORU’s Titan supercomputer to conduct potential energy surface calculations of a multi-functional organic molecule and transfer the data at high-speed between the data transfer nodes (DTNs) on their OFFN connection network.

When Science & Arts reached out to ORU, it allowed them to pursue advanced research projects with Titan’s high-performance computing capabilities. With the supercomputer scientific calculations can be processed at much higher speeds, allowing researchers to accelerate their projects and find results quicker.

“The OFFN connection provides opportunities for smaller institutions to access high-performance computing resources that previously were not a possibility, allowing for greater collaborations and scientific discovery,” said Brian Burkhart, OneNet’s senior director of network services. “The OFFN network runs parallel to OneNet’s network, and the extension of the OFFN network to the smaller institutions furthers OneNet mission of advancing research and education initiatives across the state.”

The Titan supercomputer uses Globus Endpoints installed on Science & Arts’ and ORU’s DTNs to transfer the data. The energy calculations are carried out using the ab initio ORCA software package, which parallelizes the input and runs it simultaneously on a number of Titan’s CPU nodes in order to quicken the calculations and research computing time.

“The OFFN network allows for a quick transfer of the large set of molecular configurations to ORU’s Titan. The supercomputer speeds up the calculations and the OFFN DTN Globus Endpoint connection sends them to Science & Arts,” said Doughan. “Without the OFFN connection, the data transfer between the two institutions would take a lot longer, which would impede the progress of the data analysis process.”

Doughan is leveraging his research in chemistry with the supercomputer to change certain aspects of the pharmaceutical industry processes, opening up exciting possibilities for the future. Prior to utilizing the supercomputer, researching the potential energy surface of a multi functional organic molecule would be a very slow and computationally taxing process run on a single machine. Due to the advanced computation required to successfully complete this project, Doughan put the research on hiatus for an extended time. Science & Arts’ new connection to OFFN changed that timeline.

“The ability to generate potential energy surfaces in a short period of time can change how we develop a timeline for active ingredient identification in the pharmaceutical industry, or how we decide on viable chemical reagents without having to purchase a number of candidate molecules and testing them in a wet laboratory setting,” Doughan said. 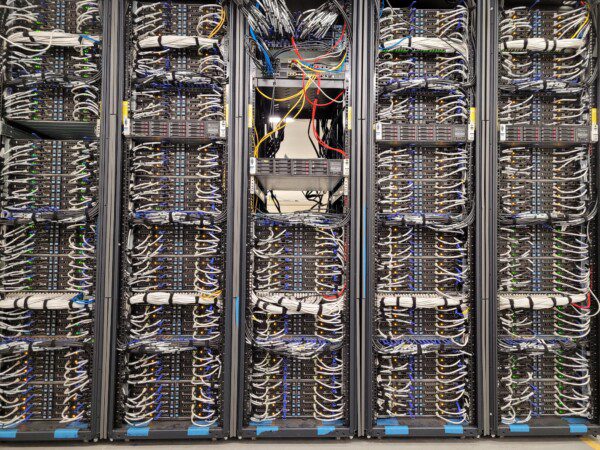 “This collaboration between ORU and Science & Arts is greatly enhanced by the OFFN network. From its inception, Titan has hosted external, non-ORU users. Dr. Doughan joins a diverse set of active external users of Titan. Titan is readily available for additional external users from Oklahoma and regional academic institutions.”

The potential collaborations and connections (both IT and human) are invaluable. The OFFN connection has linked Science & Arts researchers and students to the resources available at larger institutions of higher education in the state. Doughan envisions the OFFN connection being of great help to Science & Arts’ recruitment efforts of high-caliber researchers whose projects require the resources typically unavailable at smaller institutions of higher education.

“The creation of the supercomputer has allowed ORU to initiate projects that were initially only dreamed of to become a reality and assist other universities to pursue advanced research,” Wheat said.

For example, undergraduate students completing their senior projects have an entirely new tool to use and many have pursued projects using the Titan supercomputer. These projects range from genomics, weather forecasting, and water-leak detection on the campus to seismic image analytics through machine learning and graph database analytics. The Titan is mainly used in the science department, but has also been utilized collaboratively with political science, computer science, and data science researchers, as well as the mathematics department, for research initiatives.