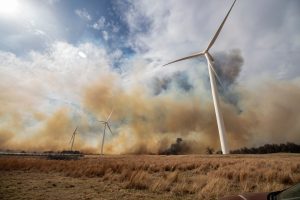 The Rhea Fire in western Oklahoma was still in its early stages when the Oklahoma Forestry Services reached out for assistance to fight the flames. The Florida Forest Service answered the call and formed a Southern States Type 1 Incident Management Team (IMT) with assistance from several other agencies. The team took command of the fire on April 15, 2018.

Many firefighters deployed to Oklahoma had extensive experience in dealing with wildfires throughout the Western U.S., where they often work out of tents in remote areas. Because of their exposure to the elements, fire teams in these areas often struggle to maintain their health and keep their electronic equipment functional.

While fighting the Rhea Fire, though, the IMT faced none of these obstacles. Southwestern Oklahoma State University (SWOSU) in Weatherford opened its doors to the firefighters, providing them with a place to stay and a base of operations throughout their deployment.

The Pioneer Cellular Event Center (PCEC) on SWOSU’s campus served as the IMT’s base while in Weatherford. From there, the team conducted briefings with local firefighters and other agencies, issued updates and alerts to the public and prepared personnel and vehicles to travel out to the burn sites.

Nate Downs, director of the PCEC, was primarily responsible for hosting the response team at the venue. He was first contacted by the Arkansas-Oklahoma Interagency Coordination Center on April 13, and worked with university administrators and local authorities to establish the PCEC as an emergency staging area the next day.

“We were busy,” Downs said. “On Sunday [April 15, the first day the IMT took command of the fire], I started to understand the scope of the operation that was coming and wondered for a moment, ‘What have I gotten myself into?’”

As the firefighting operation continued, Weatherford ran out of housing for all the firefighters coming to town. A rodeo and a softball tournament were in town that same weekend, making hotel rooms scarce. The Oklahoma Emergency Management agency turned to SWOSU for help once again, and the university furnished bedding and toiletries to house responders in Mann Hall, an empty dormitory that had recently been renovated.

The fire never reached SWOSU, though it came as close as Thomas, about 20 miles north of Weatherford. The fire eventually stretched as far northwest as Vici, about 80 miles northwest of Weatherford, and scorched over 285,000 acres across the area – about 450 square miles.

Because the firefighting operation required extensive coordination between the IMT and local, state, regional and tribal agencies, a high-quality communications infrastructure was vital to the firefighters’ success. Todd Schroeder, a wildlife mitigation specialist with the Florida Forest Service working with the IMT, said that the Information Technology department at SWOSU provided the team with email availability, access to printers, high-speed internet and support in delivering updates to the public.

“All of these services helped our team get organized and focused in our firefighting efforts throughout the management of the Rhea Fire,” Schroeder said.

As a public university, SWOSU’s internet service is provided by OneNet. The university is one of the network’s oldest partners, going back as far as OneNet’s founding in 1996. SWOSU is also an anchor institution for OCAN (the Oklahoma Community Anchor Network), which enables underserved areas across Oklahoma to access broadband fiber. High-speed internet is especially important in emergencies like the Rhea Fire, and OneNet makes that connectivity possible in Weatherford and other rural towns throughout the state.

On April 26, two weeks after the fire first began, authorities reported the fire was 99 percent contained, and the IMT would leave SWOSU and transfer command of the fire back to state and tribal agencies on April 28.

“As we begin to transition out of Weatherford, our team will carry fond memories of our time spent in Oklahoma,” wrote incident commander Keith Mousel and deputy incident commander Anthony Petellat in an open letter to the community. “Thank you all for your kindness and warmth. You have helped make the Southern States Incident Management team successful.”

Though any natural disaster is tragic, the cooperation and helpfulness demonstrated by SWOSU and the town of Weatherford enabled response teams to manage the Rhea fire quickly and efficiently. Their efforts and resources made a valuable difference in keeping Oklahomans safe and connected.